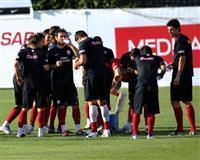 Galatasaray heads for Athens tomorrow for a friendly against the Greek Olympiakos team.