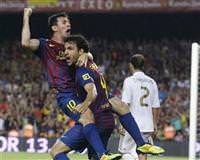 Lionel Messi volleyed a late winner as Barcelona beat arch-rivals Real Madrid 3-2 in a fiery Spanish Super Cup second leg Wednesday to secure a 5-4 aggregate victory after the match ended with a mass brawl that saw three players sent off.

The Argentine World Player of the Year capped another marvellous performance, after scoring one and setting up another in the first leg, with an unstoppable volley to claim the first silverware of the season before the trouble erupted.

Tempers boiled over on the touchline after debutant Cesc Fabregas was hacked down by Marcelo and the Brazilian defender, Mesut Ozil of Real and Barca's David Villa were all dismissed.

Messi had set up Andres Iniesta for the first goal in the 15th minute and, after Cristiano Ronaldo had quickly equalised, he scampered through to grab the second just before the break.

Karim Benzema put Real level again with nine minutes remaining but the irrepressible Messi guided Barca to victory with another piece of magic that had the crowd in raptures.

"The players have made a super-human effort because we were missing some and those we had were far from their best form," Barca coach Guardiola said.

"Messi isn't at his best level ...we have to congratulate the players for their efforts and character."

Pep Guardiola fielded the side that won the Champions League final in May, which meant new signing Fabregas was on the bench, but Real controlled the opening minutes.

The visitors pushed up on Barca from the start and Ronaldo stung Victor Valdes's hands inside the first minute as they harried and hustled their hosts all over the pitch.

The game was being played at pace when Messi picked up the ball in midfield and played the darting Iniesta straight through the middle with a perfectly weighted pass.

The Spanish international dinked the ball past the advancing Iker Casillas to open the scoring, but Real quickly levelled when Barca struggled to clear a corner and Karim Benzema's shot was diverted in by Ronaldo.

Casillas and Valdes each pulled off impressive saves on two occasions but it was Messi again who proved the difference.

When a corner was not properly cleared on the edge of the Real area, the Argentine chested the ball down to Gerard Pique.

The Barca defender back-heeled a delightful return pass to his flying team mate, who picked his way past two defenders and deftly lifted the ball over Casillas.

The second half failed to live up to the first as petty niggles interrupted the flow of the game, until Benzema pounced on a loose ball in the Barca area and struck the equaliser.

Guardiola then threw on Fabregas but it was Messi who provided the final breakthrough, feeding Adriano Correia out wide and then connecting with his low cross to smash home the winner inside the near post.

Mourinho, who has now failed to win in eight visits to the Nou Camp, remained defiant.

"If we said we were happy when we hadn't won a title we would be hypocrites," the Portuguese said.

"It's a small title, but we aren't happy we didn't win it. What we are happy with is the evolution of the team. We did very well in both games. We were fantastic."