Hand over their reward before the holiday 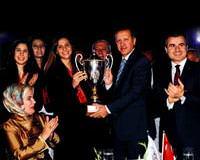 Prime Minister Erdoğan met with Turkey’s world champions girls volleyball team for an iftar dinner and demanded they be given their reward for the record win as soon as possible.

Prime Minister Recep Tayyip Erdoğan held an iftar, breaking of the Ramadan fast dinner, for 400 young athletes that have garnered medals in 50 different categories in international competitions at the Vilayetler Residence in Gölbaşı, Ankara.
Prime Minister Erdoğan and his wife Emine Erdoğan were joined at the same table by Youth and Sports Minister Suat Kılıç, recent world champions Turkey's National Girls Volleyball team and Chairman of Turkey's Volleyball Federation Erol Ünal Karabıyık.
Turkey's National Girls Volleyball Team recently signed on to a historical record by winning the FIVB Girls Youth Championship for the first time ever on Sunday.
While Erdoğan was taking photographs with the National Youth Girls Volleyball Team he asked the Minister of Youth and Sports Kılıç what their reward was and whether they had received it.
Kılıç responded by stating, "According to your directive, the volleyball champs will be given 50 pieces of gold each, 25 from our ministry and 25 on your behalf by this Friday at the latest."
Prime Minister Erdoğan responded to Minister Kılıç by stating, "Let's make sure we definitely give our girls their reward before the Ramadan holiday."
"THE OLYMPICS WOULD SUIT ISTANBUL WELL"
Following the dinner, Prime Minister Erdoğan addressed the young athletes, telling them that the 2020 Olympics would suit Istanbul well. Emphasizing that Turkey has had proven success in international competitions, Erdoğan went on to state the following:
"The issue is not solely to host the Olympics, but to continue Turkey's position in recent years of representing peace, justice and independence.
The Olympics would suit Istanbul well. We are delivering a message from here. 'Come and let's join the two symbols of peace and camaraderie together here.' With this synergy, let's carry the torch of peace and camaraderie from Istanbul to every corner of the world."