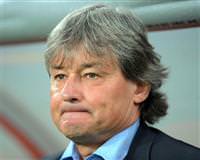 Austria coach Didi Constantini stuck with his habit of controversial selections on Tuesday by leaving three leading players out of the squad for next month's Euro 2012 qualifiers against Germany and Turkey.

German-based midfielder Andreas Ivanschitz and forward Marko Arnautovic were both omitted along with Roland Linz, joint topscorer in last year's Austrian League and leading scorer so far this term.

Austria Vienna striker Linz boosted his credentials with four goals in a recent 5-0 win over Kapfenberger SV but not even that appeared to impress Constantini.

"Roli is a very dangerous penalty area striker and scores goals as if they come off a conveyor belt," he said.

"But I don't think we're going to be spending much time in Germany's penalty area, we are going to play on the counter-attack."

Ivanschitz has not been picked during Constantini's two years at the helm despite his impressive performances for Mainz 05 in the German Bundesliga.

"Every coach has his way of thinking and every coach has his players, who he puts his faith in even if there are others who also deserve to be there," said Constantini. "I don't see any reason to change anything."

The least controversial omission was volatile striker Marko Arnautovic who was dropped earlier this year for loss of form and for off-the-field problems at Werder Bremen.

Arnautovic scored for Bremen at the weekend but Constantini said one improved performance was not enough.

"Arnautovic has shown that he has class. He has called me but the question is if anything will turn out as he promises," said Constantini.

Austria, fourth in Group A with seven points from six games, have only an outside chance of qualifying for the Poland and Ukraine finals next year. They have lost their last six matches against Germany, who lead the group with a maximum 21 points.