Fenerbahçe barred from Champions League, Trabzonspor to take their place 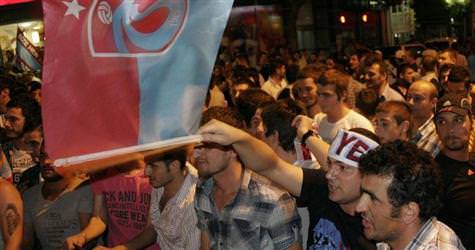 The Turkish Football Federation has barred Fenerbahçe from this season's Champions League under pressure from UEFA in connection with a match-fixing investigation involving the top Istanbul club, the federation said on Wednesday.

They will be replaced by Trabzonspor, the league runners-up last season on goal difference.
The decision is a further blow for the Turkish league which is reeling from a court investigation of match-fixing allegations involving some of the country's top clubs.
More than 30 players and officials have been jailed pending trial, including the Fenerbahçe chairman Aziz Yıldırım and the coach and deputy chairman of Beşiktaş, in connection with alleged manipulation in 19 matches.
UEFA had written to the federation (TFF) on Tuesday saying Fenerbahçe must withdraw from the Champions League or the TFF should take the decision to bar them or face a disciplinary investigation, the federation statement said.
The European governing body later announced that Trabzonspor would take their place.
"The (UEFA emergency) panel considered that the Turkish Football Federation took the right decision to protect the game, fully in line with our zero-tolerance policy against match-fixing," said UEFA general secretary Gianni Infantino.
"The TTF has shown with this decision that it takes full responsibility in the fight against corruption.
The TTF, which took the decision at an extraordinary board meeting on Wednesday ahead of Thursday's Champions League draw, has already postponed the start of the Turkish season by a month until Sept. 9 so its ethics committee can investigate the match-fixing allegations.
The federation said last week it would not take decisions regarding those clubs linked to the investigation until the court has accepted the indictment and lifted a secrecy rule.
In the meantime last season's results stand, with Fenerbahçe confirmed as champions.
A UEFA official visited Turkey this week and met with the federation and prosecutor in the match-fixing case to collect information on the investigation.
PLAYOFF PLANS
In a bid to shake off the negative impact of the investigation, the federation had announced on Tuesday plans to boost clubs' earnings and revitalize the league by deciding the Turkish first division title with a playoff at the end of this season.
That decision was announced after a meeting between the Turkish Football Federation (TFF) and the chairmen of the first division clubs.
"A playoff system will be in effect in the 2011-2012 season. We will try this. We hope it will be lasting," TFF chairman Mehmet Ali Aydınlar told reporters after the meeting.
Under the plan, the top four teams in the league will face each other in a playoff. Media reports said the plan was based on the Belgian model and came amid fears of falling revenues as a result of the match-fixing investigation.
"It may be dropped in future years but we believe that this will liven things up. We think clubs will earn more money. We want to make football more attractive," Aydınlar said.
Chairman Aydınlar said after Tuesday's meeting that the federation had proposed the playoff system to the clubs, which had welcomed it, although Galatasaray had some reservations.
"We expect this system to bring a fresh breath of air to our football," he said.
Trabzonspor, who have never played in the Champions League proper before, initially took part in the third qualifying round and lost to Benfica.
That sent them into a Europa League qualifier against Athletic Bilbao where they drew 0-0 last week. UEFA said Athletic would now qualify directly for the Europa League.