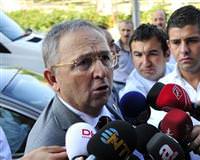 Turkish soccer champions Fenerbahçe said on Thursday they will appeal their exclusion from this season's Champions League over a match-fixing investigation involving the top Istanbul club.

They will be replaced by Trabzonspor, the league runners-up last season on goal difference.
The Turkish Football Federation (TFF) decision, taken under pressure from UEFA, has stirred further the turmoil in the Turkish league which has been hit by revenue concerns since the match-fixing court case emerged.
Fenerbahçe said its loss of revenues due to the Champions League exclusion will be some 25 million euros ($36 million) and its shares tumbled nine percent on the Istanbul Stock Exchange.
Trabzon shares surged 10 percent.
"Our club will apply to the TFF Arbitration Board to suspend and annul the decision to bar it from the UEFA Champions League," Fenerbahçe said in a statement to the Istanbul Stock Exchange.
More than 30 players and officials have been jailed pending trial, including the Fenerbahçe chairman Aziz Yıldırım and the coach and deputy chairman of Beşiktaş, in connection with alleged manipulation in 19 matches.
UEFA had written to the federation (TFF) on Tuesday saying Fenerbahçe must withdraw from the Champions League or the TFF should take the decision to bar them or face a disciplinary investigation, the Turkish federation said.
"The (UEFA emergency) panel considered that the Turkish Football Federation took the right decision to protect the game, fully in line with our zero-tolerance policy against match-fixing," UEFA general secretary Gianni Infantino said on Wednesday evening.
The TFF, which took the decision at an extraordinary board meeting on Wednesday ahead of Thursday's Champions League draw, has already postponed the start of the Turkish season by a month until Sept. 9 so its ethics committee can investigate the match-fixing allegations.
The federation said last week it would not take decisions regarding those clubs linked to the probe until the court has accepted the indictment and lifted a secrecy rule.
In the meantime last season's results stand, with Fenerbahçe confirmed as champions.
A UEFA official visited Turkey this week and met with the federation and prosecutor in the match-fixing case to collect information on the investigation.