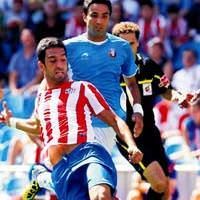 A new-look Atletico Madrid suffered a setback in their opening La Liga match of the season when they squandered several chances and twice struck the post in a 0-0 home draw with Osasuna on Sunday.
Atletico also have a new coach in Gregorio Manzano, who has brought in players including club record-signing Falcao of Colombia, Turkey midfielder Arda Turan, who came off the bench to make a second-half debut, and Spanish Under-21 striker Adrian.
"We dominated a large part of the match," Manzano told a news conference.
"We created goal-scoring chances and we should have taken them to change the final result."
On the team's website, Arda Turan stated that he wished he could have scored for the team. Turan arrives to the Turkish National Team camp to train for the September 2nd national team game against Kazakhstan for the group stage qualifying round for Euro 2012.