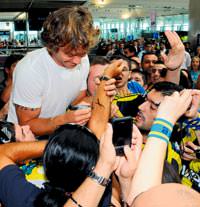 Fenerbahçe’s star player Uruguayan Diego Lugano was ushered off to Paris to join his new team PSG by throngs of fans at the airport.

Diego Lugano, who was recently transferred from Fenerbahçe to Paris Saint Germain, was sent off with a grand farewell by fans. Hundreds of Fenerbahçe supporters flocked to the Atatürk Airport. The crowds wrestled with each other just to touch the beloved player who has been with the team since the 2006-2007 season.
Lugano was hoisted up on fans' shoulders while at the International Terminal and then later signed autographs and took photographs with supporters as they chanted, "I Love You Toto", "These supporters are proud of you."
Lugano commented, "This is the first time I have experienced something like this. I have never seen anything like this before, I am so touched. I may be saying farewell to Fenerbahçe now, however I will always carry the Fenerbahçe identity with me."
FENER FANS SENT HIM OFF AND FENER FANS GREETED HIM
Not only was Lugano sent off with a grandiose display of love from Fenerbahçe fans, but he was also greeted by his former team's supporters upon his arrival to Paris. The Youth Fenerbahçe Association's European branch held a welcoming ceremony for the Uruguayan in Paris' Charles de Gaulle airport.