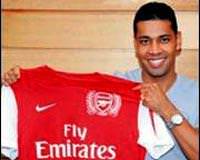 Arsene Wenger continued re-shaping his struggling Arsenal squad with the signing of Brazilian left back Andre Santos from Turkish club Fenerbahçe on Wednesday.

Santos, who edged compatriot Roberto Carlos out of the Fenerbahçe first team after joining in 2009, joins South Korea captain Park Chu-young who moved to the north London club from AS Monaco on Tuesday.
"Santos is a quality player, with the ability to both defend well and get forward and help with attacks," Wenger told Arsenal's website (www.arsenal.com).
"He has experience in the Champions League and for Brazil and has proven he can deliver at the highest level. We welcome Santos to the club and look forward to him having a big impact."
Santos, 28, made 52 league appearances for Fenerbahçe and earned the first of his 22 Brazil caps at the 2009 Confederations Cup in South Africa.
Wenger has come under pressure this season after his side managed just one point from their opening three Premier League games, including a chastening 8-2 defeat at champions Manchester United on Sunday.
The Gunners are also hoping to complete the signing of Werder Bremen and Germany central defender Per Mertesacker before the transfer window closes later on Wednesday.