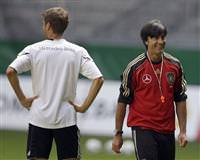 Coach Joachim Loew's team have set their sights higher than just beating Austria on Friday to book a Euro 2012 spot, saying they want to become the first German team to advance to a major tournament with a 100 percent record in qualifying.

A win at home to Austria in Gelsenkirchen in their Group A qualifier would put Germany through with two games to spare and would take their qualifying record to eight wins out of eight games.
"What we want to focus on now is to seal qualification and on Friday we have a huge chance at home against Austria to achieve this," captain Philipp Lahm told reporters.
"It has never happened before that a German team wins all qualifiers. We will do everything we can on Friday to give the Austrians no chance."
Despite a string of injuries that have reduced Loew's squad to just 18 outfield players, the Germany coach is confident absentees like Sami Khedira, Sven Bender, Marco Reus and top league scorer Mario Gomez will not be missed.
Whether he plays his usual 4-2-3-1 system or opts for a more versatile 4-1-4-1, Loew is determined to make his midfielders run.
Even without Khedira to partner Bastian Schweinsteiger in midfield, Loew has the luxury of being able to deploy hugely talented Mesut Ozil and Mario Goetze in the offensive midfield.
"It is not necessary that we always play with two on the six position (defensive midfield)," Loew told reporters. "But every midfielder needs to go forward and help in the back as well. That's what the game dictates these days."
The other options for a starting spot in midfield are Toni Kroos, Thomas Mueller and Andre Schuerrle.
Fourth-placed Austria have a far more challenging task with seven points from six games compared to Germany's 21 from seven. Belgium are on 11 from seven games, one ahead of Turkey who have a game in hand.
With only slim chances of advancing to the tournament being co-hosted by Poland and Ukraine next year, Didi Constantini's team need to win in Germany and have even recalled troubled striker Marko Arnautovic.
The Werder Bremen forward was banned from the team earlier this year after fighting with his team mates but a return to form in the Bundesliga has earned him a surprise call-up.
Austria, who entertain Turkey on Sept. 6, will need all the firepower they can get against neighbours Germany, to whom they have lost the last six matches.
Last Update: Sep 01, 2011 2:08 pm
RELATED TOPICS