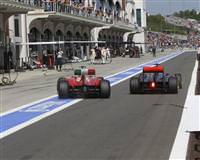 The Turkish Grand Prix was dropped from a 2012 Formula One calendar published by the sport's governing body on Wednesday.

The controversial Bahrain Grand Prix was also moved from the start of the season in March to the fourth round in April, with Australia opening the championship as it did this season.

The U.S. Grand Prix at a new circuit in Austin, Texas, was also moved from June to a new November date, when conditions will be cooler.

There will be 20 races in 2012, one more than this season after the 2011 Bahrain Grand Prix had to be cancelled due to civil unrest in the Gulf kingdom.