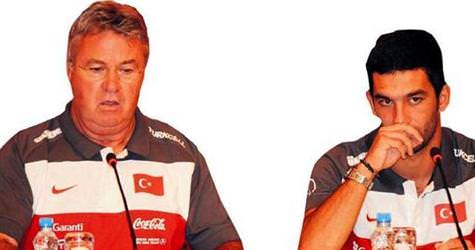 Turkey’s A National Football Team faces off against Kazakhstan tonight for the 2012 European Championship group stage.

The National Team completed their final training session prior to tonight's game at the Recep Tayyip Erdoğan Stadium in Kasımpaşa With injuries persisting for players Gökhan Gönül, Gökhan Zan, Cenk Tosun and goalkeeper Tolga Zengin, they did not take part in the training session, however with visible improvement, Servet Çetin did. Gökhan Gönül will not be playing tonight and Hiddink is expected to play Sabri in the right back position. Even though Servet Çetin joined the training session, Egemen is expected to don a uniform as a stopper in tonight's game. Hiddink will most likely make a surprising move by way of giving Gökhan Töre a chance in the position behind the forward.
National Team technical director Guus Hiddink states, "As the 2012 European Championship slowly winds up to an end, our A National Team will face two important challenges this month. Tonight we face off against Kazakhstan in the Türk Telekom Arena, and on September 6th we play an away game against Austria. Undoubtedly, our goal is to gain three points from each game in order to reestablish our true spot in second position in the group. A victory against Austria would mean we have left one other rival for the Euro 2012 finals out of commission."