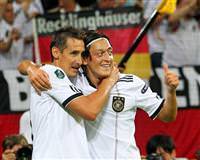 Germany became the first team to join co-hosts Poland and Ukraine at the Euro 2012 finals when they thrashed neighbours Austria 6-2 to seal top spot in Group A on Friday.

Netherlands and Italy are also almost there. The Dutch crushed San Marino 11-0 in Eindhoven in Group E to chalk up their record international victory while Italy had to work hard to beat Faroe Islands 1-0 in Torshavn in Group C.

It was also a good night for England, who won 3-0 in Bulgaria to pull clear in Group G, France, who beat Albania 2-1 in Group D and Portugal who overwhelmed Cyprus 4-0 in Group H.

Germany demolished Austria with two goals from Mesut Ozil and one each from Miroslav Klose, Lukas Podolski, Andre Schuerrle and Mario Goetze.

That gave the three-time European champions their eighth win from eight and kept them on course to finish with a 100 percent record in the qualifiers for the first time.

"We played an amazing qualification (campaign) and we could not have qualified earlier than today," coach Joachim Loew told reporters. "But we need to keep up the pressure in the team."

Germany were not the highest scorers on Friday though as Netherlands ran riot against tiny San Marino with Robin van Persie scoring four times as they recorded their biggest win since a 9-0 victory over Norway in 1972.

The Dutch, who recently replaced world champions Spain at the top of FIFA`s world rankings, made a flying start with three goals in the opening 17 minutes.

The final scoresheet comprised two each for Wesley Sneijder and Klaas-Jan Huntelaar with one each from John Heitinga, Dirk Kuyt and Georgino Wijnaldum adding to van Persie`s haul.

"Outside of the last 15 minutes of the first half our performance approached perfection," Dutch coach Bert van Marwijk told reporters. "It wasn`t only beautiful football, it was also very effective."

Having won all seven games, the Dutch tightened their grip at the top of the group with third-placed Hungary beating second-placed Sweden 2-1 in Budapest thanks to a last-minute winner from Gergely Rudolf.

Hungary are now level with the Swedes on 15 points and involved in a two-way tussle with them for the runners-up spot.

The Dutch go to Finland on Tuesday where a win will effectively take them into the finals, although if Sweden beat San Marino as expected they will retain a remote mathematical chance of overhauling them.

Italy, who are also within touching distance of the finals, took an 11th minute lead against the Faroes through Antonio Cassano but the islanders did not concede again.

"We`ve not qualified yet," said Italy coach Cesare Prandelli. "We have to stay focused. We`ve just seen how difficult this game can be."

Italy`s prospects were boosted by Estonia springing a surprise 2-1 win over second-placed Slovenia in Ljubljana with Ats Purje scoring the winner in the 81st minute, three minutes after Slovenia had equalised through Tim Matavz.

If the Italians beat Slovenia at home on Tuesday, they are through.

England are three points clear of closest rivals Montenegro after a convincing win in Bulgaria where Wayne Rooney scored twice and Gary Cahill got his first goal for his country.

That victory took England to 14 points from six games while Montenegro lost 2-1 to Wales in Cardiff for their first defeat as the home side got their first points after four straight defeats.


England can stretch their lead when they face Wales at Wembley on Tuesday while Montenegro`s next match is not until England visit in October.

France also pulled clear in their group despite a sluggish 2-1 win in Albania thanks to goals from Karim Benzema and Yann M`vila in the opening 18 minutes.

Although Albania, a much improved side from years gone by, struck a minute into the second half through Erjon Bogdani, France held on and were further helped with second-placed Belarus slipping to a 2-0 home defeat by third-placed Bosnia.

Portugal were the night`s other convincing winners, destroying Cyprus in Nicosia to make amends for the 4-4 home draw with them earlier in the campaign.

Cristiano Ronaldo scored twice and made another as Cyprus were reduced to 10 men after 35 minutes.

Portugal stay top of Group H on goal difference only though as Norway also moved on to 13 points from six matches after beating Iceland 1-0 in Oslo.

In other significant results, Greece and Croatia set up a head-to-head battle to qualify from Group F.

That left Greece top of the group on 17 points, followed by Croatia on 16 and Israel, who have played a match more, on 13.

Russia went to the top of Group B after a 1-0 win over Macedonia in Moscow while Ireland and Slovakia, who were level with them on 13 points, drew 0-0 in Dublin.

Belgium, eyeing a runners-up place in Group A behind Germany, suffered a blow to their chances when they conceded a late equaliser in a 1-1 draw away to Azerbaijan.


That result allowed Turkey, who scored a stoppage time winner in a 2-1 victory over Kazakhstan, to move ahead of Belgium in the race for second place.

There is one qualifier on Saturday when Scotland face the Czech Republic before another full programme next Tuesday.