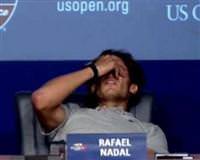 Rafa Nadal sent shockwaves through the U.S. Open on Sunday when he collapsed during his post-match news conference because of severe cramping in his leg as the first week of the tournament ended in dramatic fashion.

The scorching conditions have been a key factor in the 18 retirements so far at the final major of the season, and for a brief moment it appeared the defending men's champion would join them in an event that has become a survival of the fittest.

Italy's Flavia Pennetta was so overcome by the humidity that she began dry retching during her match against China's Peng Shuai while Argentina's Juan Martin Del Potro, the 2009 champion, bowed out after wilting in the sun.

As Australia's Sam Stosur battled to victory in another epic encounter, Andy Murray enjoyed his best performance of the tournament to defeat Spain's Feliciano Lopez 6-1 6-4 6-2 in a night match, two days after he was pushed to five sets.

There was no sign of what was to come from Nadal as the Spanish second seed eased his way past David Nalbandian 7-6 6-1 7-5, although the pair played at the hottest part of the day and were soaked in sweat almost as soon as they started.

By his own lofty standards, it was not a great performance but Nadal still overcame an experienced and streetwise opponent and has yet to drop a set at Flushing Meadows this year.

His title defence remains on track but Nadal will be well aware that improvement is needed.

His serve, which provided the foundation for his win last year, remains shaky and he is still struggling to regain his confidence after losing the Wimbledon final to Novak Djokovic.

"I think I have played better every day," Nadal said at his news conference.

"Today, for moments, I played, in my opinion, at a very, very positive level, very high level."

Moments later, Nadal suddenly stopped talking, then covered his face with his hands and slumped to the floor.

Journalists were ordered to leave the room and the lights were turned down as medical staff were called to treat the Spaniard, who slid from his chair on to the floor.

He was obscured by a desk but closed circuit television showed a trainer massaging his right leg while another man gave Nadal ice and fluids. The Spaniard remained on the carpet for about 10 minutes before he was eventually helped to his feet.

Nadal's next opponent is Gilles Muller of Luxembourg, who beat Russia's Igor Kunitsyn 6-1 6-4 6-4.

Nadal was not the only player struggling with the heat. Pennetta, who had upset Maria Sharapova in the third round, almost threw up at the back of the court as she was serving for the match in the second set against Peng.

Her game started to look as sick as her. She failed to hold her serve then fell behind 6-2 in the tiebreaker.

But the 29-year-old Italian regained her composure in the nick of time, reeling off the next six points in a row to win 6-4 7-6 and advance to a quarter-final meeting with unseeded German Angelique Kerber.

"I started having the sensation to throw up," Pennetta said. "But there was nothing inside, so it didn't come out."

Young will face Murray, who had a spring in his step after a straightforward win on the Arthur Ashe Stadium.

"I knew tonight, after coming through the last match, I was going to feel better on the court than I did in the previous round," Murray said. "I was moving well early on. I had good intensity early in the match. That's something that I'll keep with the rest of the tournament."

Andy Roddick, the 2003 champion, sailed through with a 6-1 6-4 7-6 victory over Julien Benneteau of France, ensuring the U.S. will have four men in the last 16, joining Mardy Fish, who won his third round Saturday, and the big-serving John Isner, who beat yet another local, Alex Bogomolov Jr, 7-6 6-4 6-4.

Against Petrova's compatriot Maria Kirilenko on Sunday, Stosur lost the longest women's tiebreaker played in a grand slam, 17-15, but rebounded to win the match 6-2 6-7 6-3. "I've got another record here at the U.S. Open, which is cool," Stosur said. "It was a shame I didn't win it (the tiebreaker)."

Stosur's next opponent is another Russian, second seed Vera Zvonareva, who breezed past Sabine Lisicki 6-2 6-3.