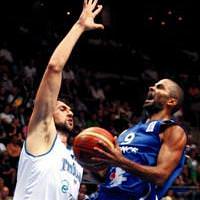 Holders Spain booked a second stage berth in the European championship with a match to spare and stated their title credentials with an emphatic 91-79 win over hosts Lithuania on Sunday.

They were joined by Serbia after the 2009 runners-up eased to a 75-64 defeat of Germany in Siauliai and France, who trailed against Italy for three quarters before putting their foot on the gas pedal to register a 91-84 success.

Having played in fits and starts in their opening three wins against modest rivals, Spain demonstrated their full repertoire in a breathtaking first half against the Lithuanians, when they romped to a 62-36 lead.

Point guard Juan Carlos Navarro scored 15 points in the opening quarter and finished as the game's top scorer with 22 points, followed by Los Angeles Lakers centre Pau Gasol on 17, Serge Ibaka on 15 and Jose Calderon who had 12.

"We were prepared and played very well today but we can still be a better team and need to stay focused," Calderon told Spanish television.

"It's a long tournament with some very good teams, so we have to take it one day at a time, the good thing is that we got everyone into the game today.

"Now that we are through to the second stage, we have to keep working hard because this was just one step forward."

Ibaka added: "It was an easy game for us because we started aggressively in defence and that made scoring at the other end easier than two weeks ago, when we lost to Lithuania in a warm-up match."

Dirk Nowitzki, who steered the Dallas Mavericks to the 2011 NBA title, was lethal as usual scoring 25 points for Germany but a more resourceful Serbian team contained his team mates with tight defence and incisive passing at the other end.

The Serbs, who face France in a mouth-watering clash on Monday, had nine rebounds and eight assists more than the Germans, with point guard Milos Teodosic at the heart of their success with 12 points, nine assists and as many rebounds.

Forward Dusko Savanovic led the winners in scoring with 18 points and centre Nenad Krstic added 15, as both teams nailed nine three-pointers from 25 attempts in a fast-flowing game.

The world's top point guard Tony Parker had a poor game and scored only eight points for France, who relied on Nicolas Batum and Boris Diaw to claw out victory against the Italians.

Charlotte Bobcats forward Diaw hauled 22 points and Houston Rockets hitman Batum chipped in 20 to cancel out a good effort by Italy's Toronto Raptors centre Andrea Bargnani, who put 22 points on the board but only five of them in the second half.

With Parker on the bench, Diaw and Batum led the charge which overturned a seven-point deficit as Bargani failed to score in the final period.

Macedonia, who romped to a memorable 72-58 win over former champions Greece on Friday, moved a step closer to their biggest success as an independent nation after coming out on top against the Finns in a game played at frantic pace in Alytus.

Roared on by several hundred fans who made the trip to the Baltic, the Macedonians held off a spirited Finnish challenge in the final period as their centre Pero Antic won the man of the match award with 14 points and 19 rebounds.

"I want to congratulate my fellow players and thank the fans for their frenetic support, they have been a sixth man on the court throughout the tournament," a delighted Antic said.

"We are exhausted but it was worth it because we played our hearts out for our country."

American-born point guard Lester Bo McCalebb led all scorers with 18 points and forward Vejdan Stojanovski added 16 for Macedonia, playing in only their third major tournament since they gained independence from the former Yugoslavia in 1991.

Poland's shooting guard Dardan Berisha swung a thriller against Turkey their way when he hit a difficult jump-shot with 12 second left to put his team in the drving seat to progress.

The Poles will advance into the top 12 if they beat Britain in their final group match on Monday, in which case Turkey will be eliminated no matter what they do against Spain.