An NBA game against France 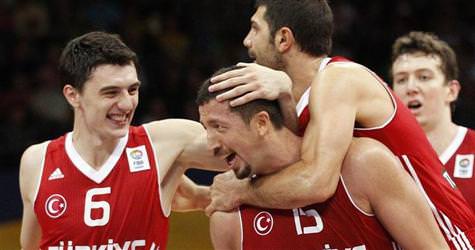 Turkey faces France, our first rivals in the second round of the 2011 European Basketball Championship at 18:00 tonight. With France’s five NBA players on the court, we aren’t far behind with national players Hido, Ersan, Ömer Aşık and even Enes.

Today we play France, our first rivals in the second round of Eurobasket 2011. The match, starting at 18:00 at Vilnius, will not be far off from being an NBA game. France's starting five line-up includes Tony Parker (San Antonio), Nicolas Batum (Portland), Boris Diaw (Charlotte) and Joakim Noah (Chicago) all NBA players. The line-up also includes Mickael Gelabale who has scored 65 percent of three-point shots attempted (11/17). On the side is Kevin Seraphin from the Washington Wizards. As for us, we have Ömer Aşık, Hidayet Türkoğlu and Ersan İlyasova, all whom played for the NBA last season. Enes Kanter, who was drafted in the third line by Utah, will be headed to the NBA this season. Yesterday the National Team trained in preparation for tonight's game in Vilnius and later celebrated Emir's 24th birthday. The other games in our group are as follows: Germany-Spain (15:30), Serbia-Lithuania (21:00).
Last Update: Sep 07, 2011 3:03 pm