Our angel of luck left us alone last night 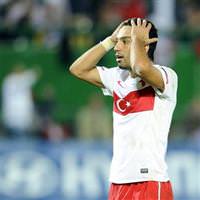 Turkey missed a stoppage time penalty as they drew 0-0 away to Austria in their Euro 2012 qualifier on Tuesday, although the result still left them well-placed to take second place in the group.

The visitors were denied three points when Arda Turan saw his spot kick saved by Pascal Gruenwald after the Austrian keeper had fouled Burak Yilmaz.

Turkey are second in Group A with 14 points from eight games, two ahead of Belgium with two matches each to play.

Austria, with eight points and beaten 6-2 by group winners Germany last Friday, are out of the running and maintain their record of having never reached the European finals through the qualifying competition.

"I think this is the Turkish way - why should we do it the easy way, when we can do it the complicated way?" coach Guus Hiddink told Turkish television.

"Burak had a bad penalty experience from the previous game so then Arda took the responsibility... But again this is the Turkish way, why make it easy?"

"We are in second position... We have two games to go, we must finish it off now."