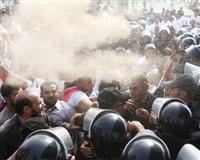 More than 130 police officers were injured in clashes with fans of one of Egypt's most prominent soccer clubs following an Egyptian Cup match in Cairo, security sources and officials at the Health Ministry said.

Security sources said the clashes broke out on Tuesday at the Cairo Stadium between Al Ahli club fans and police after some people shouted abuse at the police and the Interior Ministry. The ministry is reviled by many Egyptians for its role in suppressing the Jan. 25 uprising that ousted President Hosni Mubarak.

The fans later blocked a main road linking the city centre with the Nasr city suburb to the east before the army managed to bring the riots under control.

Sources at the Health Ministry said more than 130 policemen were hurt in the clashes, which also resulted in burning of some 13 police cars and the destruction of several privately-owned vehicles. About 50 policemen were taken to hospital.

Security sources said the clashes were not linked to the match, in which Al Ahli club trounced Kima Aswan 4-0.