Spain and Italy seal their places in Euro 2012 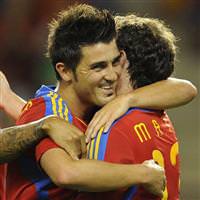 World champions Spain and Italy completed the formalities of qualification for Euro 2012 on Tuesday, Netherlands are as good as through and England are in a commanding position to secure a place in next year’s finals.

Alvaro Negredo and David Villa both scored twice in a 6-0 rout of Liechtenstein to leave Spain, who will defend their European title next year, eight points clear of Czech Republic in Group I with two games remaining.

Italy were made to sweat in Florence but a late goal by Giampaolo Pazzini earned a 1-0 victory over Slovenia which guaranteed top spot in Group C with two games to spare.

Germany qualified on Friday, meaning five of the 16 teams for next year's tournament are known including co-hosts Poland and Ukraine.Netherlands beat Finland 2-0 but despite winning all eight of their qualifiers they still need a point at home to Moldova next month before they can firm up travel arrangements as Sweden are six points behind with two matches left.

Kevin Strootman and Luuk de Jong were on target for the world's top-ranked nation while Sweden breezed past San Marino 5-0 with Christian Wilhelmsson netting twice.

England, who failed to qualify for the 2008 finals in Austria and Switzerland, beat Wales 1-0 at Wembley to move six points clear of Montenegro in Group G.

Coach Fabio Capello will not be taking anything for granted though as defeat in Montenegro next month could leave the door ajar for the Balkan nation to steal first place.

Ashley Young's 35th-minute goal sealed victory for England although Wales should have equalised late on when Robert Earnshaw squandered a golden chance from close range.

"Yes I think we were a bit lucky, they made a big mistake in front of goal but that was our luck," a relieved Capello told reporters. "In the last 15 minutes we suffered a bit."

Spain laboured initially against Liechtenstein but two goals in four minutes from Negredo and a free kick by Xavi before halftime put them in cruise control.

Sergio Ramos got on the scoresheet after the break while Spain's all-time top scorer Villa took his international tally to 49.

"We struggled a bit during the first half-hour but things improved as the game went on and I was lucky enough to score," Villa told Spanish television.

"Now we have a lot of time to think about it (Euro 2012). I think it's going to be important that we managed to qualify so early."

Like England, Italy have had to win over their fans again after a poor showing at the World Cup last year and coach Cesare Prandelli said improvements were still needed after a laboured showing against Slovenia.

"This team has made big steps but we still have to get a lot better. I'm glad we stuck to our game plan but we need to improve in finding ways of beating sides that defend in depth."

France, who were also 2010 World Cup flops, edged closer to the finals with a 0-0 draw in Romania in Group D although they still have work to do after Bosnia pulled within a point of Laurent Blanc's side with a 1-0 win over Belarus.

Top spot is likely to be decided in the final game between France and Bosnia in Paris next month.

The shock of the night came in Group B in Zilina where Slovakia were beaten 4-0 at home by Armenia who have given themselves an outside chance of qualifying.

Victory would have put Slovakia level on points with group leaders Russia, who drew 0-0 at home to second-placed Ireland, but instead they dropped to fourth.

With two matches left all four nations are still in with a chance going into next month's final fixtures which include Russia away to Slovakia and Ireland at home to Armenia.

Eduardo scored twice for Croatia as they moved a point above Greece at the top of Group F thanks to a 3-1 home victory over Israel.

Greece, who host Croatia next month, could only manage a 1-1 draw in Latvia.

Group H is still too close to call with three sides locked on 13 points after Denmark beat Nordic rivals Norway 2-0 in Copenhagen thanks to a double from Nicklas Bendtner.

Portugal, who were not in action on Tuesday, top the group on goal difference but still must face the Danes.

With Germany already qualified from Group A, Turkey look favourites for a playoff berth as runners-up although they were left to rue a stoppage-time penalty miss by Arda Turan in a 0-0 draw in Austria.

All the nine group winners qualify automatically plus the runner-up with the best record. The other eight runners-up playoff for the four remaining spots.