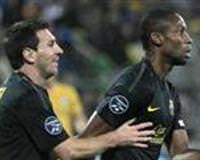 Holders Barcelona barely broke a sweat in a ruthless 5-0 hammering of BATE Borisov while former champions AC Milan made harder work of finding the net before overcoming new boys Viktoria Plzen 2-0 in the Champions League on Wednesday.

Lionel Messi drew level with Ladislau Kubala as Barca's second highest scorer of all time thanks to a double in a dominant performance on a rainy night in Minsk as the Spaniards went joint top of Group H along with Milan.

Seven-times champions Milan needed second-half goals to break the deadlock against Czech side Plzen at the San Siro with Zlatan Ibrahimovic converting a 53rd-minute penalty and setting up Antonio Cassano for the second 13 minutes later.

On a good night for former European champions, Olympique Marseille distanced themselves from a poor domestic campaign to demolish Borussia Dortmund 3-0 as the German champions matched their lacklustre early Bundesliga form.

"It was not perfect but we've got six points," was the verdict of Marseille coach Didier Deschamps, who watched a sour end to the game when substitute Jordan Ayew was sent off in stoppage time, picking up a second yellow card for diving.

Brother and Ghana forward Andre Ayew scored twice for the hosts and France striker Loic Remy got the other as they maintained their perfect start in Group F, where they have a two-point lead over second-placed Arsenal.

Arsene Wenger's side enjoyed a better outcome to fellow English club Chelsea in nervy endings to their games, holding on to an early lead to beat Olympiakos Piraeus 2-1 while Andre Villas-Boas' men conceded a late penalty to draw 1-1 in Valencia.

While Wenger watched the game from the stands as he served the last match of his touchline ban, teenager Alex Oxlade-Chamberlain made a dream start to his European debut with an eighth-minute opener.

The injury-hit London side were two up after 20 minutes through Brazilian left back Andre Santos before the Greek visitors got back into the game with a David Fuster header on 27 minutes and from then on Arsenal merely hung on.

Many miles away in Belarus, Barcelona made no such meal of their early lead as the champions seemed to barely let their hosts touch the ball.

BATE helped Barca on their way with Aleksandr Volodko's 19th-minute own goal and a header from Pedro followed three minutes later.

Argentine World Player of the Year Messi headed in just before the break and smashed a fourth high into the net to reach 194 club goals. Still aged only 24, Messi is now only 41 goals behind top scorer Cesar Rodriguez.

"As Pep Guardiola said at the weekend (after Messi scored a hat-trick against Atletico Madrid), we are watching history being made so we should try and enjoy it, because we know it will be very difficult to see another player like him," Barca's Javier Mascherano said.

David Villa wrapped up the scoring against BATE, who despite effectively playing 10 at the back could not contain Barca's effortless class.

Back in Spain, Barca's La Liga rivals Valencia were anything but effortless against Chelsea, looking nervous despite their home advantage and they fell behind to a Frank Lampard first-time strike in the 56th minute.

The English side had plenty of chances to go further ahead but instead wiped out all their good work when substitute Salomon Kalou needlessly flapped an arm at a Valencia cross and the referee pointed to the spot with three minutes left.

Roberto Soldado struck the ball in low for the equaliser as Chelsea watched the three points evaporate on Juan Mata's return to his old stomping ground.

"I think it was more deserved for us to win this game," Chelsea boss Villas-Boas told Sky Sports. "To be so near to win the game and to be in such a good position leaves us a little bit with a feeling we don't like.

"It's useless and pointless to go on about it right now. These are referees decisions, it's nothing new for Chelsea."

Chelsea lead Group E with four points, one ahead of Bayer Leverkusen who beat visitors Racing Genk 2-0 with Chelsea old boy Michael Ballack making sure of the points with a stoppage-time goal after Lars Bender's first-half strike.

In the night's other games, Zenit St Petersburg beat 10-man Porto 3-1 in Group G with Roman Shirokov netting a double in Russia, while in the same group Shakhtar Donetsk drew 1-1 at home with surprise group leaders APOEL Nicosia.