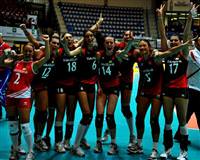 The ‘Sultans of the Net’, Turkey's Women's Volleyball Team successfully managed to beat the latest champions Russia without handing over a single set.

Turkey's Women's volleyball team has written their name on to the semifinals. The Sultans of the net continue to write legends at the European Volleyball Championship held in Italy and Serbia. Last night's quarterfinal game between Turkey and last year's world champions Russia was filled with a number of historical successes. Turkey managed to win by every set at 3-0 and has moved on to become a semifinalist in the European Volleyball Championship for only the second time in the team's history.
IT'S EITHER SERBIA OR POLAND!
Turkey's rivals in the semifinals will be the victors from tonight's Serbia-Poland game. The final four games will be played in Belgrade and begin on Saturday.