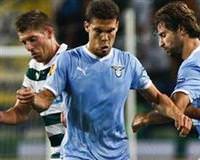 New Schalke 04 coach Huub Stevens rekindled memories of leading the Germans to 1997 UEFA Cup glory with an easy 3-1 win over Maccabi Haifa in the second round of Europa League group matches on Thursday but favourites Paris St Germain lost.

Christian Fuchs scored twice to hand Dutchman Stevens a winning start to his second spell in charge in Gelsenkirchen having been appointed on Tuesday following Ralf Rangnick's resignation due to exhaustion.

"That was a good performance by us against a strong team. Haifa were technically accomplished and had quick movement," Stevens, whose side reached the Champions League semi-finals last term, told reporters.

French co-leaders PSG, who spent millions in the close season after a Qatari takeover and have again been linked in the media with a move for David Beckham, slumped to a 2-0 defeat at Athletic Bilbao.

Spanish compatriots Atletico Madrid, who lifted the trophy in 2010, grabbed a late 1-1 draw at Stade Rennes through Juanfran after Victor Montano's 30-metre shot took a wicked deflection to fly in on 56 minutes.

Atletico beat Celtic in their first outing with Radamel Falcao following up his heroics for last season's winners Porto with a goal for his new club but he failed to shine in Brittany.

Ki Sung-yong's penalty handed hosts Celtic an early lead but Udinese's Almen Abdi hit back also from the spot on 88 minutes for a 1-1 draw to leave the four-team Group I wide open.

Tottenham Hotspur went one down to Irish debutants Shamrock Rovers but three goals in five minutes after the hour mark sealed a 3-1 win in Group A and led to huge sighs of relief inside White Hart Lane. Group D pacesetters Sporting beat Lazio 2-1 at home after scoring either side of Miroslav Klose's 40th minute strike.

Also in Portugal, last season's runners-up Braga fell to a 2-1 defeat by in-form Club Bruges on a balmy evening.

Birmingham, beaten at home by Braga last time out, came from behind to edge out Maribor 2-1 in Slovenia to keep Group H looking lively.

He added a second late on as Fulham belied the fact they are the only team without a Premier League victory this term.

Striker Baye Djiby Fall had two good chances for the hosts but Mark Schwarzer made a superb save to stop a toe-poke and another acrobatic effort just went wide.

The Group K honours remain with Twente Enschede, however, after their 4-1 thumping of Wisla Krakow.

A contrast of styles made for an entertaining Group E game where Besiktas scored a well-worked goal by Roberto Hilbert only for physical hosts Stoke City to soon level through Peter Crouch and win 2-1 after Jonathan Walters' 78th minute penalty.

Maccabi Tel Aviv and Dynamo Kiev managed a 1-1 draw in the other group game while PSV Eindhoven scored twice late on for a 3-1 victory at Rapid Bucharest in Group C.

Among other results, Russian duo Lokomotiv Moscow and Rubin Kazan slipped up at home with a 2-0 reverse against Anderlecht and a 2-2 draw with PAOK respectively.

The following is a list of results from last night's games: