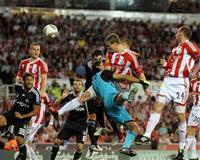 Beşiktaş played superior in last evening's away game against Stoke however lost their 0-1 lead only to end up losing 2-1 in the second game of the UEFA Europa League Group Stage.

We played well in the first half, yet handed over the power which we shared with Stoke City in the second half of the game. In the 14th minute, an exceptional pass by Quaresma made its way to Hilbert who scored as he fell bringing the score up by one in favor of Beşiktaş. Our joy lasted for a single second however, as Crouch caught Rüştü alone and managed to secure the draw goal. In the 60th and 75th minutes the Brits put on the pressure. In the 60th minute, Crouch made his second most serious attempt to score, but the ball hit the goalpost. In the 79th minute, the referee called a penalty shot due to a struggle between Sivok and Crouch. The penalty shot by Walters turned into a score, which sealed the deal for Stoke City and stole three points we had practically held in our palms.
Quaresma's game in European leagues is at a whole different level… However if only he didn't play so independently… When he tired in the second half, Beşiktaş fell behind in the center field.
Technical Director Carlos Carvalhal had warned of corner and touch shots the day prior, however it appeared no heed was being paid as practically every side ball posed a danger by our rivals.
Beşiktaş had won the past three league games played despite inferior performances. It was sheer luck… Well this time, luck was not on Beşiktaş's side.
Last night Beşiktaş did indeed play stronger than they have in the league of late. They were the victims however of an unfortunate error and a debatable penalty call.
Results and standings from the remaining games played in the Europa League Group E:
Maccabi Tel Aviv: 1 - Dynamo Kiev: 1
Stoke City: 2 – Beşiktaş: 1
Standings P W D L F A Pts
Stoke City 2 1 1 0 3 2 4
Beşiktaş 2 1 0 1 6 3 3
Dynamo Kiev 2 0 2 0 2 2 2
Maccabi Tel Aviv 2 0 1 1 2 6 1
Previous results: Sept. 15
Beşiktaş: 5 - Maccabi Tel Aviv: 1
Dynamo Kiev: 1 - Stoke City: 1