Women and children to go free at Turkish matches 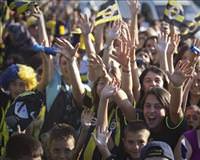 Spurred on by the popularity of last week's match between Fenerbahçe and Manisaspor in which male fans were banned, the Turkish Football Federation (TFF) have declared that women and children can attend top division matches for free as part of its drive to combat hooliganism.

The announcement follows a TFF directive earlier this month stating that all clubs serving a spectator ban due to disorderly behavior were to admit women and children under the age of 12 instead of playing in front of an empty stadium.
The new initiative is part of a campaign entitled "The Beautiful Game Will Stay Beautiful".
The project will help "increase interest in this beautiful game, prevent violence and disorder, deter ugly chanting and create an environment where families can watch a match in peace," the TFF said on its website.
The cost of the tickets will be met by the TFF and paid to the clubs, it added.
Turkey is home to some of the world's most passionate soccer fans and rivalry often turns to violence. In December, thousands of Beşiktaş fans threw rocks and bottles to breach a police cordon and attack Bursaspor supporters. Three people were hospitalized with knife injuries.
Last week, Turkish champions Fenerbahçe played in front of a 41,000-strong crowd of only women and children, the first time in the history of professional soccer.
The TFF had initially ordered Fenerbahçe to play their first two games of the season in an empty stadium after fans stormed the pitch during a pre-season friendly against Ukraine's Shakhtar Donetsk, but then had a change of heart.