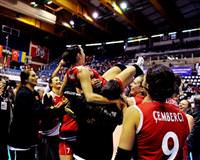 Turkey’s ‘Sultans of the Net’ came out victorious over Italy to secure the top third spot in the 2011 Women’s European Volleyball Championship.

Turkey lost 3-2 to hosts Serbia in the Women's European Volleyball Championship semifinals, losing the chance to qualify for the finals.
Serbia went on to face-off against Germany in the finals. With a 3-2 win over Germany from 25-16, 20-25, 25-19, 20-25 and 9-15 sets, Serbia set a historical record by winning the European Championship for the first time.
Turkey faced off against Italy to determine the third and fourth place winners. Beating Italy by 3-2 with sets 21-25, 25-15, 27-25, 19-25 and 10-15 Turkey took third place, securing the bronze.
Overall, Turkey did well in the championship, hosted by Italy and Serbia. By finishing off the Group Stage second in Group B, Turkey went on to beat Spain in the play-off round as well as world champions Russia. However a loss in the semi finals to hosts Serbia saw Turkey facing off against Italy, the other hosts, to win a spot in third place at the 2011 Women's European Volleyball Championship. The game, played in the Hala Pionir Sports Center, ended in Turkey's favor by 3-2 with sets 21-25, 25-15, 27-25, 19-25, 10-15. The 'Sultans of the Net', who were victorious over last year's European Champions, have secure the bronze medal in the European Championship.