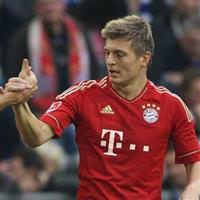 Germany midfielder Toni Kroos could miss the Euro 2012 qualifier against Turkey on Friday but could be fit for next week's game against Belgium, coach Joachim Loew said on Tuesday.

The Bayern Munich midfielder is bedridden with a flu virus and blood tests on Tuesday showed he might not be fit to travel with the team to Istanbul.

"Toni Kroos could miss out," Loew told reporters. "He was still in bed with a virus yesterday but he felt better, but today blood results show he is still not over it. So we may decide that he can't travel with us."

Loew also said team doctors would examine Mesut Ozil's injury, picked up while playing for Real Madrid on Sunday, and a knock on forward Miroslav Klose. Both are expected to be fit.

"We will see with Mesut Ozil how serious it is, (Lazio striker) Klose also said he got a knock on his knee but other than that I have no negative responses."

Germany, who have already qualified and lead Group A with 24 points from eight games, are eager to set a national record for going through a major tournament qualifying stage without dropping a point.

"We have qualified so early and enormously dominant and with many young players who have great prospect for the future," said Loew.

"This dominant qualification does not mean a Euro title, that's clear," he warned.

"We also have the aim of ending this qualifying campaign without a loss of points. We will try to win these two remaining games. Because 10 games and 10 wins is our wish. We could set a new milestone," Loew said.