Turkey vs. Germany tonight for Euro 2012 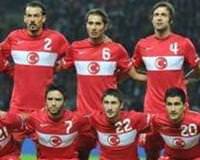 Turkey’s National Team hosts Germany tonight for the first of the final two tests needed to be passed in Euro 2012 qualifying round.

In order for Turkey to qualify for the play-offs the National Team must secure four points from the next two games. Tonight's match will be held at the TT Arena and kicks off at 21:30.
Turkey faces a difficult challenge tonight in its pursuit to compete in the 2012 European Championship which will be hosted by Poland and Ukraine.
The National Team hosts Germany, a team which has yet to lose a game in the Group stage, at the Türk Telekom Arena tonight. Having lost to Germany in the Euro 2008 semifinals as well as in the 2012 qualifiers, the National Team's objective is to leave the field with at least one point tonight in order to secure a significant advantage to place second in Group A. The National Team has won both games played in the TT Arena prior and tonight the stadium's 52,000 seating capacity is expected to be full.
TONIGHT'S STARTING LINE-UP
The starting line-up for tonight's critical game is as follows: Volkan, Gökhan, Servet, Egemen, Hakan, Aurelio, Sabri, Selçuk İnan, Hamit, Arda and Burak.