Turkey loses 3-1 to Germany, leaving spot up to luck 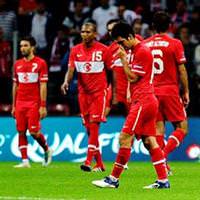 Germany, already qualified for Euro 2012, beat Turkey 3-1 on Friday to maintain their perfect record with nine wins from nine games and dent their opponents' chances of qualifying.

Mario Gomez fired in from inside the box after a fine solo effort after 35 minutes with Thomas Mueller doubling their lead midway through the second half before Hakan Balta's goal 11 minutes from time gave the hosts some brief hope.

Bastian Schweinsteiger, however, sent keeper Volkan Demirel the wrong way as he converted an 86th minute penalty and secured the win for his team.

"Compliments to the players," Germany coach Joachim Loew told reporters. "We held our own in this stadium and this atmosphere. To beat a team that is highly motivated in front of 50,000 of their own fans is quite an achievement."

Already qualified for next year's tournament, Germany are eager to become the first team from their country to win 10 out of 10 qualifiers for a major tournament. They top Group A on 27 points with their last game next week against Belgium, who moved up to second on 15 with a 4-1 win against Kazakhstan.

Turkey dropped to third on 14 and are hoping Germany will set their record against Belgium to give them a chance of a second-place playoff spot when they host Azerbaijan.

In a fiery atmosphere with 50,000 fans jeering and whistling during the German national anthem, Turkey, desperate to secure second spot, came close after five minutes.

Germany goalkeeper Manuel Neuer pulled off a great save, instinctively palming a Hamit Altintop close-range effort over the bar.

Turkey pushed on and Selcuk Inan almost completed a quick move down the right in the 29th minute but his shot from 10 metres sailed over the bar.

A weak header at the far post by Holger Badstuber was all Germany could manage until the 35th minute when Neuer threw the ball over 40 metres to Mueller.

The Bayern midfielder sent a deep cross to Gomez, who controlled it with one touch, shook off his marker and rifled in a powerful left-footer from just inside the box.

Guus Hiddink's Turkey came back and cut the deficit in the 79th with Balta firing a Gokhan Gonul pass but Schweinsteiger dashed any hopes, converting the penalty awarded after Mueller was brought down in the box.

Dutchman Hiddink said he was confident Turkey would still clinch second spot in Group A. garnering them a chance to continue on in the Euro 2012 qualifiers.

"Yes of course. Because we have to win on Tuesday and Germany will have to beat Belgium. We believe we will reach the playoffs because there cannot be any surprises at these games," he told reporters.