Vettel will only get better 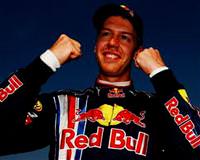 "He still needs to work on some of his English jokes and some of his haircuts have been a little bit strange this year," he smiled.

Apart from that, the 24-year-old has been simply phenomenal -- a word that Horner used eight times in the space of a six-minute conversation with reporters in the team motorhome.

Vettel clinched the title after finishing third in Japan behind winner Jenson Button of McLaren and Ferrari's Fernando Alonso.

He has won nine of 15 races, been on pole position 12 times, finished on the podium on 14 occasions and, with four races to spare, is not finished yet.

That sort of supremacy has not been seen since Michael Schumacher was at his peak for Ferrari, and Vettel is only in his fourth full season.

It is hard to see how he could be much more dominant next season but he still has plenty of room for improvement nonetheless.

"Maybe he doesn't crash cars in first practice, that would help also, but it's only happened three times (this year)," the Austrian told Reuters.

"He will be more mature (next season) and he will be better on the technical side. His speed has a little bit to gain still. I'm sure he is not on his zenith, at the top of his performance. For sure he isn't there yet."

Vettel crashed his car in Friday first practice at Suzuka but still grabbed pole position Saturday after the team flew a new version of the smashed front wing out from England.

He also crashed in practice in Canada and Turkey, but qualified on pole for both races as well.

On Sundays, he has not finished lower than fourth and has scored points in his last 17 grands prix.

Last year, he suffered three retirements and had another finish out of the points.

The irony, as Vettel himself pointed out at Suzuka on Sunday evening, is that this year's Red Bull is perhaps less dominant than the 2010 one even though the results have been better.

The big difference has been reliability, with the Renault engine running faultlessly.

"I think with a less dominant car than last year, we were able to do a very, very good job," said Vettel.

"We are very strong as a team. Every time it mattered, we made very few mistakes.

"This year I think it has been more about engines than in any other year," added the German. "Not maybe in a performance perspective as in raw power but playing around with engine modes.

"I think Renault has pushed very hard and a lot of our performance is down to them."

He did not mention it but the switch from Bridgestone tyres to Pirelli has also been a factor, with Vettel's Australian team mate Mark Webber struggling to get performance out of the tyre after years with the Japanese brand.

That allowed Vettel, his confidence already sky high after his 2010 title, to assert himself right from the start and get a huge leap on others.

Last year, Red Bull won nine races but Vettel was first in only five of them.

With 324 points so far this year, he has already scored 68 more than in all of last season.

"It will be hard for him to better what he's achieved so far this year but knowing Sebastian he is never satisfied and will always be looking to improve and that's what makes him such a strong driver," said Horner.

Marko agreed all the ingredients were in place for Vettel to shine again in 2012.

"We are developing, we will bring new parts to all the next races, and as we think this car is more or less the base for next year's I'm sure we will be a frontrunner," he said.