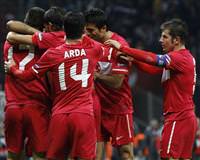 Turkey secured a place in the Euro 2012 playoffs after a Burak Yilmaz second-half goal earned Guus Hiddink's side a 1-0 win over Azerbaijan on Tuesday, moving them into second place in Group A.

The Trabzonspor striker fired the ball into the net in the 60th minute after a long through ball by substitute Selcuk Inan sent him clear.

Euro 2008 semi-finalists Turkey needed a win to ensure a definite place in the playoffs but Belgium's 3-1 loss to group winners Germany meant a draw would have sufficed.

"I think it's a compliment for the team in a very difficult season in Turkish football to have accomplished the playoffs," the Dutch manager said of Turkey's performance.

"It was not a very difficult game. I think we started the first period of the game very well, we made a good press, we were playing a very good possession play," he added.

Turkey looked the better side from the start, with Real Madrid midfielder Hamit Altintop sending several shots just wide of the Azeri goal during the first half.

They controlled the second half too and after Yilmaz made the breakthrough he was denied a second goal when his shot was well saved by the Azeri keeper in the 84th minute.

"Azerbaijan played extremely defensive so we had difficulty in finding many chances," Yilmaz said.

"We suffered a lack of confidence after the Germany game, but it's important what our team does rather than other teams. We want to participate in Euro 2012 really bad and it doesn't matter who we face in the playoffs now, we will do our best."

Turkey, who suffered a 3-1 home defeat by Germany last week, finish the campaign in second place with 17 points, behind Germany, who won all 10 of their games. Azerbaijan finished fifth in the six-team group on seven points.

Turkey will now compete in the playoffs in November to try and secure a place in Euro 2012.

"Hopefully the players are getting better and better ... we will watch them closely in the upcoming weeks, in Turkey and outside Turkey and we'll see to make a very competitive team for the upcoming difficult games," said Hiddink.