Beşiktaş faces off against Dinamo Kiev 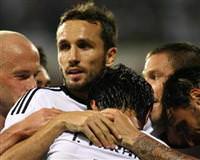 Beşiktaş is in Ukraine in order to play their third game in the UEFA Europa League Group E qualifying round against Dinamo Kiev tonight.

Beşiktaş's young goalkeeper Cenk Gönen addressed the fans upon the teams arrival to the airport. "We will display a good game for our fans and want to return to our country bringing back three points. We have left the Kayserispor game behind us. We have forgotten that game and are fully focused on the Dinamo Kiev group."