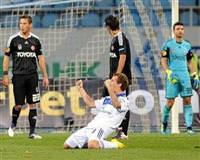 Beşiktaş had a sole intention last night and that was to secure at least a single point. And they played with those intentions all the way up to the 90+3, single minute before the end of the game. Unfortunately it was not meant to be as fellow Group E rivals Dinamo Kiev scored a goal in the 90+4 minute of last night's game. Beşiktaş tried its best but Dinamo Kiev came in from the right, came in from the left and as the end of the game approached they did everything in their power to score, which they did. In the end all it took was a side ball and a momentarily asleep Beşiktaş. The whistle blew and the film had a bad ending for Turkey's representatives in the UEFA Europa League. Beşiktaş's hopes of successfully making it past the group stage will have to wait until November 3rd.
Last Update: Oct 21, 2011 10:21 am
RELATED TOPICS