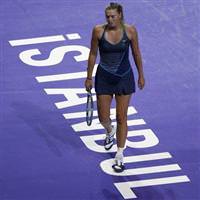 Three of the year's Grand Slam champions and world number one Caroline Wozniacki, whose CV still has a conspicuous blank in the Majors column, line up in Istanbul this week as the WTA Tour finals make their debut in Turkey.

The eight-player event will bring the curtain down on a topsy-turvy year for the women's game in which Serena Williams, the best player of her generation, returned and three first-timers won Majors.

Denmark's Wozniacki was handed a tough assignment in Red Group which also includes Wimbledon champion Petra Kvitova from the Czech Republic, Russia's Vera Zvonareva and Poland's Agnieszka Radwanska, the last player to book her place at the season-ender.

Three-times Grand Slam champion and former world number one Maria Sharapova, who rekindled her career this year after battling back from injury, is joined in White Group by Victoria Azarenka, French Open winner Li Na and Australian Samantha Stosur who beat Serena Williams to win the US Open.

Sharapova is making her first appearance at the prestigious finale since 2007 and is aiming to win it for a second time, having triumphed in 2004.

It would go some way to making up for the disappointment of failing to add to her Grand-Slam haul this year despite rediscovering her powerful best.

"I think we all know what to expect going into the groups. It's the top eight girls of the year," the 24-year-old Russian said after the draw.

"You're going to get a tough group either way and a tough opponent. I think it's just a matter of being ready from the first round on."

Consistency is the watchword of Wozniacki with six titles to her name this year, although failing to reach a Grand Slam final gave more ammunition to the critics who question her ability to rise to the really big occasions.
WTA Championships : Previe

She reached the final in Doha last year and would love to go one better in what is a high-quality field that resembles the last eight of a slam.

"It's a tough group, obviously, but both groups are tough. It's great players. I'm going in there just hoping to play my best tennis and we'll see what happens," she said.

Li Na is the first Chinese player to qualify for the WTA finals, although since becoming a national hero at Roland Garros, she has suffered a worrying loss of form.
WTA Championships : Woznia

A meeting with Sharapova may prove inspirational, however, as it was the Russian she beat in the semi-finals at the French Open.

Round-robin action begins on Tuesday at the Sinan Erdem Arena.