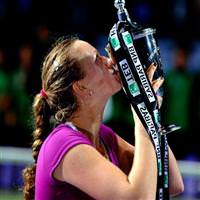 Petra Kvitova provided further proof that she is the rising force in women's tennis when she beat Victoria Azarenka 7-5 4-6 6-3 to win the WTA Championships on Sunday.

The 21-year-old Czech, who shot to fame by winning Wimbledon this year, produced a display of power and skill to finally overpower the gritty Azarenka and claim the $1.75 million jackpot after remaining undefeated at the year-ending event which featured the world's top eight players.

Victory also confirmed Kvitova at a career-high second in the WTA rankings after ending 2010 in 34th spot and she will enter the new year with No.1 Caroline Wozniacki in her sights.

Left-handed Kvitova's free-flowing game took her into a 5-0 lead in the opening set inside the Sinan Erdem Dome but she lost the next five games as the errors began to stack up.

She finally edged the opening set on a fifth set point but Azarenka, who could also have taken the number two ranking with victory, refused to be cowed by her opponent's superior firepower and kept her nose front to win the second set.

Azarenka had three break points at the start of the third set but could not convert any of them and it was to prove a pivotal moment as Kvitova regained control to take the title on her debut at the showpiece tournament.