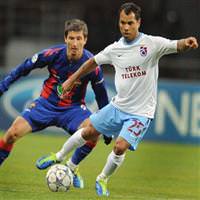 Trabzonspor faces off against fellow rivals in Group B of UEFA’s Champions League CSKA Moscow tonight in what will mark the team’s 91st game in European cups.

After losing to CSKA Moscow by 3-0 in their first ever game against the team, Trabzonspor hopes to secure a victory from the Russian team in order to continue on their Champions League adventure.

Trabzonspor is competing in the Champions League for the first time in the club's history. , Tonight Trabzonspor hits the field to play the team's fourth face off in Group B. The team's first Champions League Group Stage game brought a surprising 1-0 victory against Inter Milan. Trabzonspor's second game was against French representatives Lille and ended in 1-1 draw. An away game against CSKA Moscow was lost by 3-0. At present, Trabzonspor stands in third place with four points.