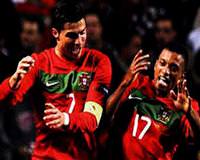 Portugal scored six goals against Bosnia including a Cristiano Ronaldo double to grab a ticket to the Euro 2012 finals while Ireland, Czech Republic and Croatia completed the lineup without the need for a frenzied finale to their playoff wins today.

Portugal's second leg was the only tie still finely balanced following a goalless draw in the first match and, after letting Bosnia back into the game twice, they finally ran out 6-2 winners after the visitors were reduced to 10 men.

It was a lot easier for the other three qualifiers, who had established comfortable first-leg cushions with Ireland beating Estonia 5-1 on aggregate and the Czechs and Croats overcoming Montenegro and Turkey by the same 3-0 aggregate scores.

While celebrations were in full swing in Dublin before the Irish had even kicked off holding a 4-0 lead from the first leg, there was everything to play for in Lisbon.

Early goals by Ronaldo and Nani put the 2004 runners-up 2-0 ahead midway through the first half before Bosnia got a lifeline when Zvjezdan Misimovic converted a 41st-minute penalty.

The visitors' hopes were short-lived though as Ronaldo's second goal eight minutes after the break restored Portugal's two-goal advantage and a minute later Bosnia were reduced to 10 men when Senad Lulic was sent off.

Being a man down did not put them off as Emir Spahic cut the deficit in the 65th, prompting Portugal to at last take the game by the scruff of the neck by scoring three goals in 10 minutes with two for Helder Postiga and one for Miguel Veloso.

Ireland had already done the hard work in their first leg and any lingering Estonian thoughts of a comeback were wiped out when Stephen Ward swept in a rebound after visiting keeper Pavel Londak parried a Kevin Doyle header in the 31st minute.

Estonia got a 57th-minute consolation through Konstantin Vassiljev to make it 1-1 but the night belonged to the Irish, who will appear at their first major finals since the 2002 World Cup.

It was a sweet moment for Ireland, who were devastated two years ago when French striker Thierry Henry handled the ball in setting up a goal bundled in by William Gallas as France beat them to qualify for the 2010 World Cup finals.

"It's a great night for all the Irish fans. It's a night we'll never forget," Ireland captain Robbie Keane, who scored twice in the first leg in Tallinn, told Sky Sports television.

"Our team spirit has got us through this campaign. This is why we play football, for situations like these."

Ad Feedback They will be joined in Poland and Ukraine by Croatia, who like Ireland made up for past hurt in the best possible way.

Slaven Bilic's side exacted revenge on Turkey with a 3-0 aggregate win over the country that knocked them out of the Euro 2008 quarter-finals on penalties after equalising with the last kick of extra time.

Tuesday's match in Zagreb ended goalless but the damage had already been done in Friday's first leg and the only unfinished business is whether local media reports suggesting Turkey coach Guus Hiddink will eventually step down come to fruition.

Another team whose first-leg advantage proved to be enough were Czech Republic who reached their fifth successive European championship finals by beating Montenegro 1-0 in Podgorica to complete a 3-0 aggregate victory.

Midfielder Petr Jiracek struck in the 81st minute to make sure of qualification after Montenegro, who like Estonia were looking to reach their first major tournament, had pushed the Czechs hard in the second half of the return leg.

Czech Republic had their goalkeeper Petr Cech, wearing a specially designed mask after breaking his nose, to thank for pulling off a series of saves to keep the hosts at bay.

Some of the other teams who had already qualified for the finals were also in action in friendlies as they continued their preparations for next June's 16-team tournament.

World and European champions Spain were held 2-2 by Costa Rica, needing a late David Silva goal and a stoppage-time equaliser from David Villa to spare their blushes against lowly opponents who led 2-0 by halftime.

That result came just three days after Spain were beaten 1-0 by England, who overcame Sweden by the same scoreline at Wembley on Tuesday to end a 43-year wait for a win over the Swedes thanks to a 22nd-minute own goal by Daniel Majstorovic.

Euro 2008 runners-up Germany inflicted a 3-0 defeat on 2010 World Cup runners-up Netherlands with Thomas Mueller, Miroslav Klose and Mesut Ozil getting the goals in a ruthless attacking display against their neighbours.

Euro 2004 winners Greece slumped to a 3-1 defeat in Austria against Romania, who have not qualified for next year's finals but who nevertheless ended their opponents' 17-match unbeaten run, while Italy lost 1-0 to Uruguay.

There were boos in Paris as former world and European champions France laboured to a 0-0 draw with Belgium, who will not be appearing at the continental showpiece, even though the result extended the hosts' unbeaten run to 17 games.