Terim pursues a first in this weekend’s derby 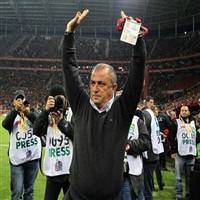 -SMILING THROUGH CUP GAMES-
Unable to secure a victory against Beşiktaş at the İnönü Stadium, Fatih Terim made up for it through beating their arch rivals in Turkish Cup games.

Under Fatih Terim's leadership, Galatasaray walked away from Dolmabahçe with a 2-0 win for the 1999 Turkish Cup. In 1997, Galatasaray scored a 6-0 victory for the TSYD Cup.