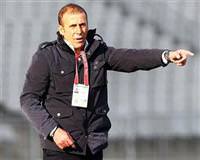 Abdullah Avci was named as Turkey's new coach on Thursday to replace Dutchman Guus Hiddink after their failure to reach Euro 2012.

"I am very happy to be granted the honour of such a duty, we will take important steps to improve the national team," Buyuksehir Belediyesi Spor boss Avci said during his unveiling.

The football federation said his contract would expire on May 31, 2015.

Avci is the longest-serving top-flight coach in Turkey, having led Istanbul club Buyuksehir for the past five years.

He led the side to promotion to the Super League in 2007 and helped the side reach the Turkish Cup final for the first time.

Avci also trained the national team at youth level and enjoyed a European Championship victory as well as a fourth-place finish in the Under-17 World Cup in 2005.

Hiddink's contract as Turkey coach was terminated by mutual consent on Wednesday after the team lost to Croatia in a two-legged Euro 2012 playoff.

Turkey's best result was a third place finish at the 2002 World Cup.