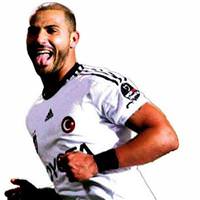 In last night’s meeting of Turkey’s two European cup representatives, Beşiktaş were the ones to come away smiling. Benefitting from Trabzonspor’s post–Inter exhaustion, Quaresma’s penalty shot sealed the deal for the visiting team.

Last night, Beşiktaş was thinking, "I'll put one point in my pocket first and then if I go on to gain three points from a win… well that would be super." Trabzonspor on the other hand was in pursuit of a win. However, there was one big difference… Trabzonspor struggled to keep a handle on the ball. To be quite honest, they lacked in offense as well as defense. Beşiktaş on the other hand secured superiority in the first half and continued to seek out a win in the second.
Trabzonspor was still recovering from the Inter game which exhausted the team both mentally and physically. Şenol Güneş may have made a mistake by playing the same starting line-up as in the Champions League game. This time the performances of Halil, Burak, Alanzinho and Zokora began to drop at some point during the game. In other words, Beşiktaş managed to stop Trabzonspor from attacks in the first half and struck the tired team in the second. Carvalhal had super tactics and everything worked like clockwork.
Glancing over the first half of the game… in the 14th minute, Alanzinho came face to face with Cenk, however the ball hit the side post and went out. One minute later, Beşiktaş took a chance with Egemen. The former Trabzonspor player struck a close distance shot, however goalkeeper Tolga hit the ground to stop the ball from going in. Quaresma made an attempt by passing Tolga to shoot the ball in from the diagonal; however Cech in defense saved the ball by distancing it at the line.

SAVE AFTER SAVE, BUT HOW FAR CAN YOU GO
The scene was the same in the second half. Beşiktaş cornered Trabzonspor, barring them from a chance to play. In the 56th minute, Quaresma attempted once again, but didn't make it past Tolga. In order to open up the defense, Şenol Güneş brought in Adrian in the 60th minute. In the 69th, Burak shot an excellent left diagonal strike; however Cenk, with the same excellence managed to save the ball from becoming a goal. In the 77th, Hilbert's strike was saved by Tolga. Then just as Mustafa was about to send the ball into the post, Celustka's attempt to disrupt the position left Mustafa on the ground and a penalty shot granted to Beşiktaş. Celustka was sent off the field. It was Quaresma who shot the penalty kick, securing the 1-0 lead for Beşiktaş. Referee Fırat Aydınus became the man of debate when he said continue to a position between Burak and Ibrahim only to cancel a goal by Trabzonspor at the last minute due to a foul call.
THREE CRITICAL POSITIONS IN THE GAME
There were three important positions in last night's match. The most important occurred when Mustafa wanted to strike a ball returned from Tolga, yet he was tackled by Celustka which led to a penalty call. At this point, the referee threw Celustka out and issued a penalty shot to Beşiktaş. Afterwards, during a position between Burak and Ibrahim, the ball hit Toraman's hand, to which Aydınus said 'continue'. The most debatable position came when Trabzonspor's goal was cancelled due to a foul on Egemen the ref called in the final minute of the game.

TRABZONSPOR REVOLTS
Trabzonspor's fans were enraged when it appeared Egemen threw himself to the ground in the 90+3rd minute resulting in the cancellation of a score by the home team. Not only did the fans protest Trabzonspor's former player, but they also reacted towards referee Fırat Aydınus for not only cancelling the team's sole score, but also for disregarding the side referee's flag in a position between Ibrahim and Burak.