Beşiktaş is in Israel for tonight’s Europa Cup game 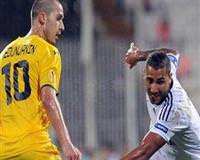 Beşiktaş faces off against Israel’s Maccabi Tel Aviv in an away game which marks their fifth in Group E for the UEFA Europa League.

The game kicks off in Tel Aviv's Bloomfield Stadium at 22:05 and will be overseen by Belgium referee Serge Gumienny.

Gumienny will be assisted by Mark Simons and Frank Bleyen and additional referees Luc Wouters and Alexandre Boucaut with Sebastien Delferiere as fourth referee.

In the first leg, Beşiktaş beat Maccabi Tel Aviv in Istanbul by 5-1. Played in the Fiyapı İnönü Stadium, Beşiktaş's goals were scored by Almeida (2), Aurelio, Egemen and Edu.

They may guarantee the round with one game remaining…
If Beşiktaş wins tonight against Maccabi Tel Aviv, and their closest rivals Dinamo Kiev lose to leaders Stoke City, then Beşiktaş could very well guarantee passing the round, with a single game to spare.
With six points at present after four games played, Beşiktaş will be seeking out a win to bring their points in the group up to nine. At five points at present, if Dinamo Kiev loses tonight in England then the point difference could be four points, which would guarantee Beşiktaş the second spot in the group and a ticket to the next round.
Should Beşiktaş lose or draw in tonight's game, then whether or not they make it past the group stage will have to be determined in the final round of games.
For the final group stage games, Beşiktaş will be hosting Stoke City in Istanbul while Dinamo Kiev will be hosting Maccabi Tel Aviv.
Sivok is on the penalty line
Beşiktaş's Czech footballer Tomas Sivok is on the border of receiving a yellow card penalization. With two yellow cards thus far collected in the Europa League games, should Sivok receive another yellow card in the game against Maccabi Tel Aviv tonight then he will be unable to don a uniform in the final week game against group leaders Stoke City. Meanwhile, Maccabi Tel Aviv's Yoav Ziv will not be able to play due to a card penalty.