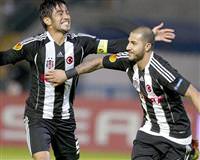 Quaresma secured the win against Trabzonspor and by scoring a double in last night’s game against Maccabi, has opened the door for Beşiktaş to continue on in the UEFA Europa League.

With last night's 3-2 win against Maccabi Tel Aviv, Beşiktaş is now even closer to passing the group stage for the UEFA Europa League. Quaresma's effective game playing and two scores, the latter of which came in the 90+2nd minute has secured the advantage for Beşiktaş to place second in Group E.
While breathlessly watching last night's game, it was inevitable not to conjure up visions of horror films as there was a petulant player on the field. He could have been thrown off for a position at just the start of the game, but thank goodness that did not transpire. That player was Quaresma and he took Beşiktaş by the strings last night. After bringing down Trabzonspor, last night it was Maccabi Tel Aviv that he conquered. As a result, he has quite possibly secured Beşiktaş' entrance into the next round. Both of his goals were amazing.
Beşiktaş decided to place priority on securing the defense and was therefore resigned to playing the majority of the game on their side of the field. As a result, in the first 25 minutes, Maccabi Tel Aviv proceeded to attack with the hopes of securing their first win against Beşiktaş. However, after the first 25 minutes, Beşiktaş began paying visits to Tel Aviv's side and brought the score up by 2-0.
Then a Beşiktaş classic, the relaxed, which worked to Maccabi's favor and they brought the score up to a draw. The draw was distasteful for Beşiktaş, however the team's very own Messi, Quaresma took over.
The first goal came at the end of the first half. Quaresma shot an excellent volley from the penalty field line and all Maccabi's goal keeper Levy could do was watch the ball go in. We ended the first half with a goal, and then started off the second with another. Ibrahim was the one to score from a ball that passed over Ernst's head in the 48th minute,
In the 60th, Beşiktaş was unable to distance a corner shot ball and Yeina went ahead and brought the score difference down to one. In the 71st minute, Logashi took control of the ball and when no one came to join him, he took a distance shot which went straight over Cenk's head and into the post.
In the final stoppage minutes of the game, Quaresma passed through four players to send the ball into the post, securing Beşiktaş's 2-3 win.
Beşiktaş is now in second place with nine points in Group E. They play group leaders Stoke for their final game. Dinamo Kiev is behind with six points and will host Maccabi Tel Aviv at home. Although Beşiktaş has a difficult game ahead of them in which they host Stoke in Istanbul, they lead their third place rivals in averages. So, basically should Beşiktaş lose and Dinamo Kiev win, they will have to do so with a significant difference in goals.