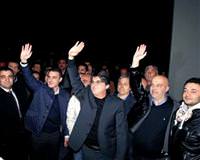 A Turkish court freed eight suspects in a major match-fixing case Monday, including the coach and an executive of Beşiktaş, media reported, giving a boost to soccer club shares which have been hit hard by the investigation.

Shares in Beşiktaş surged 10.7 percent on the news, while Fenerbahçe rose 5.6 percent. Shares in Galatasaray, who are not named in the match-fixing indictment, jumped 8.4 percent.

The Turkish parliament passed a law at the weekend reducing prison sentences for match-rigging from a maximum 12 years to three years, defying a call from President Abdullah Gül for MPs to revise a law which he vetoed earlier this month.

Gül, who is now obliged to approve the legislation, had said the new law did not represent a sufficient deterrent and had encouraged the view that it was passed to benefit certain individuals.

A total of 93 soccer officials and players, including the chairman of champions Fenerbahçe, Aziz Yıldırım, are set to go on trial in the investigation, according to the indictment which the court accepted last week.

The Turkish Football Federation (TFF) has said it will act quickly in taking measures concerning individuals named in the case but it will not act against clubs until the season is over. It barred Fenerbahçe from this season's Champions League when the allegations first surfaced.

Among the defendants is a TFF deputy chairman, Goksel Gumusdag. European football's ruling body UEFA has yet to comment on the latest developments in the case.

The first hearing is set for February 14.

Olgun Peker, an ex-president of club Giresunspor, and Yıldırım accused of being gang leaders among a raft of charges ranging from match-fixing to the payment of bribes.

The indictment names eight clubs, including Fenerbahçe, Beşiktaş and Trabzonspor, who are currently in the Europa League after replacing Fenerbahçe in this season's Champions League. Fourteen players are among the defendants.

The investigation alleged manipulation in 19 matches, including Fenerbahce's 4-3 victory over Sivasspor which won the league championship on the final day of last season.