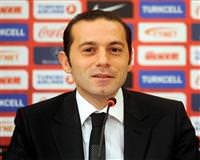 Turkey may not have qualified to play in the Euro 2012 championship, but Cüneyt Çakır, a referee from the Turkish Football Federation has been selected as one of 12 referees.

Howard Webb of England, who showed a record 14 yellow cards in last year's World Cup final between champions Spain and runners-up Netherlands, was also named on Tuesday on a list of 12 referees for Euro 2012.
The referees will be aided by goalline assistants in the finals in Ukraine and Poland following a decision by the International Football Association Board (IFAB) to continue with the experiment being used in UEFA's club competitions.
The 12 are: Cüneyt Çakır (Turkey), Jonas Eriksson (Sweden), Viktor Kassai (Hungary), Bjorn Kuipers (Netherlands), Stephane Lannoy (France), Pedro Proenca (Portugal), Nicola Rizzoli (Italy), Damir Skomina (Slovenia), Wolfgang Stark (Germany), Craig Thomson (Scotland), Carlos Velasco Carballo (Spain) and Howard Webb (England).
The most notable absentee is Belgium's Frank de Bleeckere, 45, who retired at the weekend.
The Euro 2012 finals will be played from June 8-July 1.