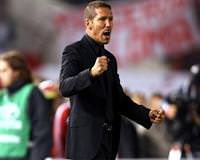 Atletico Madrid have hired former Argentina captain Diego Simeone as coach to replace the sacked Gregorio Manzano as the La Liga club seek to get their Champions League qualification bid back on track.

The 42-year-old Simeone, who quit Argentine side Racing Club on Tuesday, had accepted an offer to take charge of the team for the rest of this season and one more campaign, Atletico said in a statement on their website (www.clubatleticodemadrid.com).

A fan favourite during two stints playing for Madrid's second club, he is due arrive in Madrid on Monday and be presented to the media on Tuesday at Atletico's Vicente Calderon stadium, they added.

Atletico's unpopular board finally put the embattled Manzano out of his misery on Thursday when they sacked the 55-year-old after half a season in charge following a humiliating King's Cup elimination by third-tier Albacete.

Atletico are 10th in La Liga with 19 points from 16 matches and there is widespread discontent among fans about the way the heavily-indebted club are being run.

They underwent a sweeping restructuring in the close season, with forwards Sergio Aguero and Diego Forlan moving on and striker Radamel Falcao and midfielders Diego and Arda Turan arriving along with Manzano.

However, an erratic campaign, including a 5-0 league drubbing at Barcelona and Wednesday's Cup debacle, signalled the end of Manzano's second stint as coach.

Atletico lost 1-0 at home to Albacete to go out 3-1 on aggregate.

Chief executive Miguel Angel Gil Marin told As sports daily on Friday that Simeone was the right man to restore the club's fortunes.

"Above all we think he can achieve the vital goal of finishing in the top four," and qualifying for the Champions League, he said.