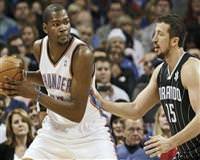 LeBron James, Carmelo Anthony and Derrick Rose all shined as the NBA tipped off in style on Christmas Day with some sparkling action putting aside memories of the five month long lockout.

The Miami Heat immediately showed why they are title favorites by beating last season's champions the Dallas Mavericks, while the New York Knicks enjoyed a surprise victory over the Boston Celtics at Madison Square Garden and the Chicago Bulls produced a great comeback to beat the Los Angeles Lakers.

The games were part of a five-game opening day to the delayed and reduced 66-game regular season after the dispute between players and owners over a new collective contract ended earlier this month.

When they finally reached a new collective bargaining agreement, that was ratified on December 8, the teams had just 17 days to get their rosters filled, hold brief training camps, complete a couple of warm-ups and get ready for Sunday's openers.

The opening day quickly gave fans a taste of what was at risk with some great displays from top performers.

The Heat ruined the Mavericks' championship celebrations with a resounding 105-94 victory led by standout performances from James and team-mate Dwyane Wade in Dallas.

The Heat had to wait in their locker room as the Mavericks raised their championship banner minutes before the start of the game as Dallas players, wearing "2011 NBA Champions" on the back of their tracksuits, celebrated.

But when the game got underway, finals MVP Dirk Nowitzki and team-mates Jason Kidd and Jason Terry were swept aside by an impressive Heat,

Miami were 97-65 up after three quarters, before allowing Dallas, who never led, to make the score respectable in the fourth.

Last season's league MVP, Rose, crowned a superb comeback from the Bulls with a one-handed running shot over Pau Gasol to win the game 88-87 with 4.8 seconds remaining.

Kobe Bryant's last gasp attempt to steal it back for the Lakers was dashed as his shot at the buzzer was blocked by Luol Deng.

Rose scored 22 points with Deng making 21 as the Bulls overturned a six-point lead in the final two minutes while the Lakers missed four free throws in the final 1:40.

Bryant scored 28 points for the Lakers but will be disappointed to have started the season with a home loss.

Carmelo Anthony was the top performer for New York, scoring 37 points as the Knicks enjoyed a 106-104 victory over the Celtics.

The Knicks were fastest out of the blocks taking a 34-23 lead at the end of the first quarter and leaving Celtics head coach Doc Rivers fuming at his team, telling them they were "playing soft."

Boston trailed 62-52 at half-time but piled on 35 points in the third quarter to lead by eight heading into the last period.

The Celtics had won their last eight games against the Knicks but New York fought back this and Anthony's two free throws with 16.3 seconds left proved to be the game winners as Boston failed to score again as Marquis Daniels missed a three pointer then Kevin Garnett missed a 16 footer at the buzzer.

Rajon Rondo was the top scorer for Boston with 31 points while Anthony scored 17 points in the last quarter for New York.