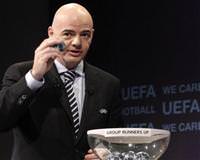 UEFA has not ruled out excluding clubs caught up in the Turkish match-fixing scandal from future European competitions, general secretary Gianni Infantino said.

"There are no plans in this respect but there are rules that we are applying in the same way to all clubs," Infantino told Reuters on the sidelines of a football conference in Dubai.

Fenerbahce were stopped from participating in this season's Champions League by the Turkish Football Federation after allegations of match-fixing, which include the Istanbul-based club's 4-3 victory over Sivasspor which won the league championship on the final day of last season, first surfaced.

Indictments were issued earlier this month by a Turkish court against 93 officials and players, including the chairman of Fenerbahce, for match-fixing in a case which has sent shockwaves through the country.

The process has been complicated by the passage this month of a law in Turkey which reduces the maximum prison sentence for match-fixing to three years from 12 years.

Infantino would not be drawn on the move but urged all sides to tackle the problem.

"On the criminal side, there we urge all governments to act very firmly because we are dealing with criminal organisations so it's a serious matter," Infantino said.

"On the other side, we urge the federations to adopt a zero tolerance policy and to take the necessary measures against those who are involved in match-fixing."