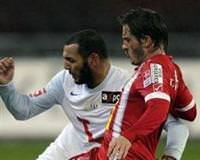 Defiant Swiss club Sion have had 36 points deducted for fielding ineligible players in the league, the country's FA (SFV) said on Friday.

The SFV's decision came two weeks after FIFA threatened to suspend Switzerland if Sion were not punished for fielding six players who were signed in the summer when the club was subject to a transfer ban.

Sion had also defied FIFA and UEFA statutes by taking their case to the civil courts, at one stage forcing UEFA president Michel Platini to give explanations to a Swiss prosecutor.

"This points deduction is to punish the illegal behaviour of FC Sion, also contrary to the statutes and rules, by illegitimately getting around the transfer ban imposed by FIFA and fielding non-eligible players," the SFV said in a statement.

FIFA's executive committee, meeting in Tokyo on Dec 17, had given the Switzerland a deadline of Jan. 13 to follow its instructions or face a ban which would also result in FC Basel being expelled from the Champions League.

The SFV said it had deducted three points for each of the 12 games in which Sion had fielded any of the six players, leaving the team bottom of the league with minus five points and almost certainly condemning them relegation.

However, it stopped short of FIFA's demand that Sion be punished with 3-0 defeats, saying this would have resulted in other teams being awarded points, distorting the championship.

The case began when Sion signed Stefan Glarner, Jose Goncalves, Mario Mutsch, Pascal Feindouno, Billy Ketkeophomphone and Gabri despite being banned from doing so after FIFA found them guilty of poaching a player from an Egyptian club in 2008.

The six players took their case to a civil court in the canton of Valais, which ruled they could play, and Sion subsequently fielded them in the Swiss league.

Some of the players also appeared in a Europa League qualifying tie against Celtic. Sion won the tie but were expelled from the competition by UEFA who ruled the players were ineligible.

Sion then obtained an injunction at another court in the canton of Vaud, where UEFA's headquarters are based, ordering European soccer's governing body to reinstate them to the competition.

However, this injunction referred the matter to the Court of Arbitration for Sport (CAS) which on Thursday ruled in favour of UEFA.

In the meantime, the injunction obtained by the players in Valais canton was also overturned by a higher court.

The case has caused acute embarrassment to Switzerland with other clubs admitting it has damaged the country's image in the sport.

Last week, the Swiss Players' Union angrily criticised FIFA's ultimatum, accusing soccer's governing body of playing "power games" at the expenses of the FC Basel players, who had nothing to do with the Sion case.

FIFPro, the world players' union, has also hit out at FIFA.

"We do not agree with the consequence that players of FC Basel, a totally different club, or national team players become the victims of the actions of FC Sion," said general sectary Theo van Seggelen.