'Sultans of the net' headed for London 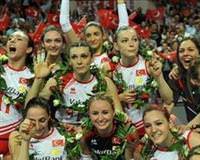 Having secured themselves a spot in the 2012 London Olympics, Turkey’s A National Women’s Volleyball Team will be meeting with the press tomorrow in Istanbul.

Beating Poland in the final of the European Olympic Qualification Tournament on May 6th, Turkey's women volleyball team became the seventh team to qualify for the 2012 London Olympics. According to an announcement from the team's sponsor VakıfBank, it is this success in the European Olympic Qualifications and the team's Olympics goals that will be the main items to be discussed in tomorrow's press conference.