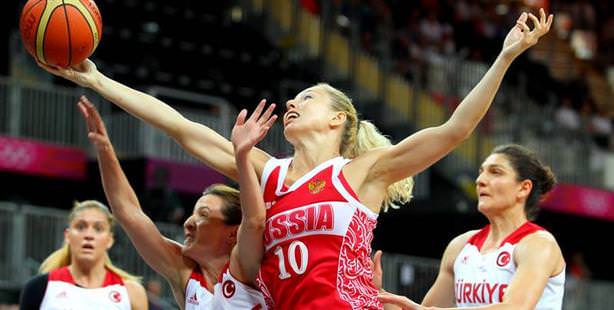 Russia held off Turkey 66-63 in a nail-biting finish to an evenly matched game to advance to the semifinals of the Olympic women's basketball tournament on Tuesday.

The rematch of last year's EuroBasket final went Russia's way again when a three-point attempt by Turkey's Birsel Vardarli bounced off the rim as time expired.

Turkey's women, in their first Olympics, were one of the surprise teams in the preliminary rounds, posting a 4-1 record with their only loss coming against the powerhouse U.S. team.

"I think today was a really equal game," said Russia coach Boris Sokolovskiy, whose team had a 3-2 record in qualifying. "I think we were luckier. I've seen Turkey progress a lot."

The teams entered the fourth quarter tied at 51-51 and the game came down to a close struggle over the final seconds.

Russia's American-born point guard Becky Hammon drove through Turkey's defence for a lay-up that snapped a 62-62 tie with 14 seconds left.

With 10.5 seconds left, Turkey had a chance to stay alive with a three-pointer, and Vardarli, who had made 2-of-3 from beyond the arc, got a good look but failed to sink it.

"If we would have won, we would have had a chance of a medal. That is how important this game was," said Turkey coach Ceyhun Yildizoglu.

"Our goal is to make the Turkish people proud of us. I believe in the future we will do really great things in the Olympics."

Shot statistics backed up how tight the game was with Russia making 25-of-60 shots and seven three-pointers while Turkey was 24-of-59 with six three-pointers.

Russia, who will face either France or the Czech Republic in Thursday's semifinals, was led by naturalized Russian citizen Hammon, who scored 19 points.

In the other women's semifinal, four-time Olympic defending champions the United States will play Australia, who have lost to the Americans in the last three Olympic gold medal games.