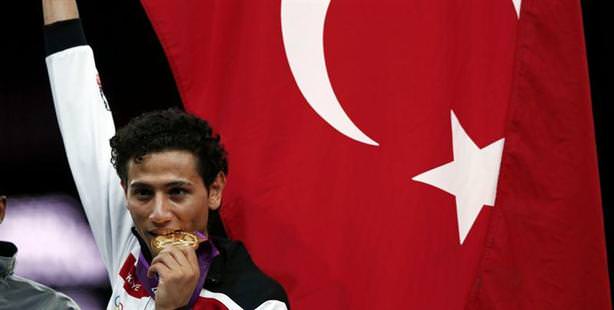 Servet Tazegül won the men's taekwondo featherweight gold medal at the London Games on Thursday, beating Iran's Mohammad Baghrei Motamed in the final by a score of 6-5.

Tazegül, the world number one and Beijing bronze medalist, defeated Britain's Martin Stamper to reach the final and was the class act of the -68kg category.

His aggression and speed was too much for Motamed, who also lost to Tazegül in the final of last year's world championships in South Korea.

Tazegül dedicated the gold medal to his mother, who died earlier this year.


"I lost my mother two months ago. I really wanted to get the gold for her," he said. "But it was a hard time, I did not train much plus I had the injury."

This is Turkey's first gold medal win in taekwondo in the history of the Olympics. Prime Minister Recep Tayyip Erdoğan called the athlete by phone shortly after the win to congratulate him on his efforts.

Rohullah Nikpai, who won Afghanistan's first Olympic medal with a bronze in Beijing, picked up another bronze through the repechage, along with American Terrence Jennings.

"I think that right now everyone in Afghanistan must be dancing."